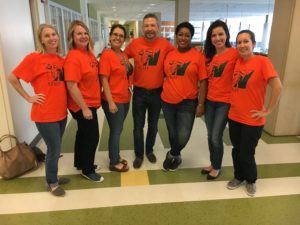 The Vision for World Languages at Wakefield High School:
“Students communicating enthusiastically about a variety of topics and in multiple contexts while enriching their lives and preparing for a successful future“

Because of our Spanish Immersion Program, we maintain a close link with the Embassy of Spain in Washington D.C. as an ISA school and were named ISA High School of the Year in 2015. Teachers maintain other professional relationships with French and Spanish speakers in North and South American, Europe, Africa, and Asia.

Wakefield hosts a “Declamation Contest” in March every other year. This event features selected World Language students from beginners to more advanced reciting memorized poetry before a large audience in the school auditorium. A panel of fluent speakers of outside judges, often university level professors or embassy staff, rate the students on rubrics. Winners receive small prizes donated by local businesses and individuals. If you wish to contribute or participate, please contact kathryn.wheelock@apsva.us.